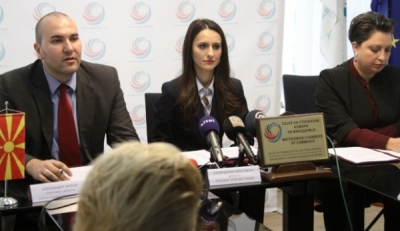 Women in Macedonia have an entrepreneurial spirit and want to open their own businesses. However, it is necessary to empower women entrepreneurs, urges the business sector and relevant institutions. A majority of women are included in the active employment measures, according to data. But the Association of Businesswomen suggests that women should be further empowered business­wise, because only a few manage to start well-paid businesses with gender inequality still being considered an issue.

“According to data of the Employment Agency, over 35.8% of women have opened their own businesses. The aim is to raise the number of businesswomen… Before 2007, no measures were offered to women for financial support to open businesses, thus this is a great achievement and that percentage is rising year after year,” said Slobodanka Aleksovska of the Skopje Employment Center.

According to Valentina Disoska, chairwoman of the Association of Businesswomen, women entrepreneurs must be empowered. As regards the three key indicators determining gender inequality, Macedonia is still lagging behind, she said. Of the total number of working women, at least 12% hold top management posts in companies with 6% of women working as managers in the private sector, show findings of informal polls. Most women are employed in the sectors of insurance and finances, followed by healthcare, according to the Employment Agency.