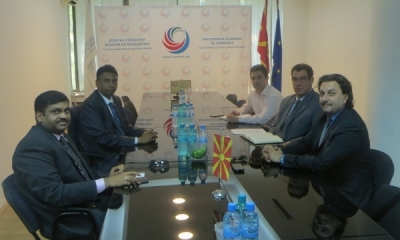 In cooperation with the Ministry of Foreign Affairs, Indian business delegation in the presence of Macedonian Ambassador to India Mr. Tony Atanasovski, met with the Executive director of Macedonian Chambers of Commerce, Mr. Mitko Aleksov.

Macedonia and India established diplomatic relations and official delegations of Macedonia several times visited India. Macedonia’s most closely with India in the field of metal industry with the potential to enlarge and in other sectors.