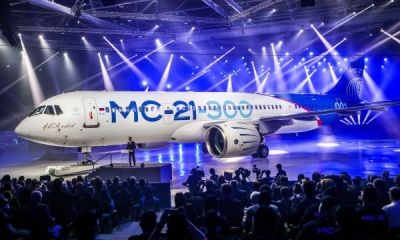 Key parts of the new “MS-21” Russian passenger jet that promotes last month Russian President Dmitry Medvedev made a machine manufactured in Prilep company “Mikrosam.” It is a new generation of passenger aircraft, and this Russian model is considered technological leadership, stronger than “Boeing” and “Airbus” .Tehnologijata at which “Mikrosam” make the robotic machine place Macedonia among the four countries in the world that have been developed equipment and software of automatic laying composite material, which are then used to produce parts of the aircraft. Similar are made in the US, France, Spain and Macedonia.

World media reported that the aircraft will be the pride of the Russian aviation and that will offer extremely pleased with the flight of all passengers.

“Mikrosam” deliver the machine at the beginning of 2015 than in Siberia and began production of the new “MS-21”. It manufacturer “Irkut Corporation” made vertical stabilizer which is one of the key parts of the new plane. The machine is the ultimate achievement in this field because it automatically makes the composite strip quickly, a process that has so far done manually.

The aircraft will be produced in two variants, one to 211 seats and another 165 seats. Currently still in the exploratory stage, and system production will begin next year.

– It is not made of metal but of composite materials. It allows us to make a special shape, appearance. It is lighter and stronger, which is a major step in the development of our airline industry – said Vladimir Volkov, Deputy Chairman of “Irkut Corporation”.

Besides the “microscope” produces a similar machine factory in Spain to “Airbus”, another in France for “Boeing” and another in the United States for “Boeing”. Therefore, this Macedonian company’s great success, although it is not news that “microscopic” break down the barriers of working and new technologies.

They took the latest line of cars

They say that one of the biggest companies in the world producing cars approached to produce cutting-edge line in the world, to this point, producing an automotive part. This section has ever produced and is considered to be a new era in the production of cars. The automated and robotic equipment from “microscope” has already been delivered and is expected by the end of this year or early next year to sell cars with parts manufactured equipment from Prilep company. Hence the “Journal” say the brand name who made the order will soon be published that secrecy was part of the deal. The technologies that are developed “microspheres” are used in the aviation and space industry. This company is fully export oriented. Reinforcing firms for satellite equipment from Russia, the largest producer of plastic parts of India, ABB of Sweden, suppliers of “Philips” and “Samsung”, “Win Flow”, “Reshetnev”. The equipment produced in “microscopic” produce composite materials that are used in medical and electrical industry.