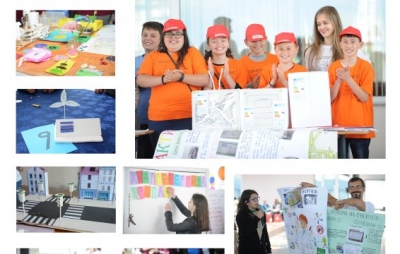 The children quiz contest in knowledge of energy efficiency, held in Struga, is the latest content from the school project of EVN for the school year 2015/2016.

Winners of the competition were students from “Manchu Matak” from Krivogashtani, the second place went to “Kole Nedelkovski” from Skopje, and third placed were the students from “Hristo Uzunov” from Ohrid. The competition week began with the summer school, where a team made up of young people from several secondary schools in the country, created custom made games for the quiz.

Sixty children competed at the quiz with knowledge within the energy clubs EVN this year formed in twelve different schools throughout the country.

Raising awareness about energy efficiency through continuous education for reasonable and safe use of electricity is the goal of the School project for over 9 years organized EVN Macedonia. Through the activities of the school project to create new generations of reasonable electricity users, whose awareness of energy efficiency will be an inseparable part of the lifestyle.

Through modern methods of education, over 37,000 students in primary schools from fourth to sixth grade increased their knowledge about the origin of electricity, ways of saving, as well as safety measures for its use. Children also had the opportunity, through enforcement of local promotional campaigns to learn how knowledge to convey to their parents, classmates and the entire community.

The school project of EVN won the award for social responsibility and is a unique example of cooperation between the private and civil sector. Partners in the project of EVN Macedonia civil society organizations: Association Connect, Center for Energy Efficiency (MACEF), Youth Council Ohrid, Harvest knowledge from Prilep and Strumica Planetum.