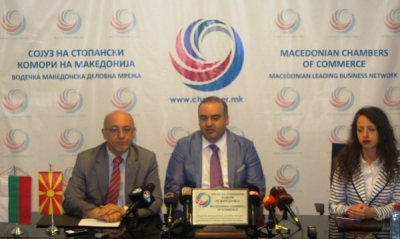 At today’s press conference of Macedonian Chambers of Commerce (MCC) led by Mr. Arkan Kerim, President of  Tourism Chamber at MCC, H.E. Mr. Ivan Velikov Petkov, Ambassador of the Republic of Bulgaria in the country, it was discussed about increasing tourism cooperation between the two countries, an increasing number of tourists and creation of joint tourism offers from Macedonia and Bulgaria to compete in third markets.

Improving the tourism cooperation between Macedonia and Bulgaria and joint appearance on third markets is of great importance for the economies of both countries because tourism is a phenomenon of the modern world and modern life, and one of the largest industries in the world which directly affects the increasing economic growth and contributes to long-term positive effects in other sectors.

“Deepen the tourism cooperation between the two neighboring countries and developing quality tourism services to attract tourists from third countries is our goal, as investments in tourism is investing in economic growth and stability in the longer term. Bulgarian tourism market is important for Macedonia in the number of tourists and the number of nights visiting the same country and a constant growth, “said Arkan Kerim, President of the Tourist – catering chamber at UCC.

The tourism-catering chamber at MCC President Mr. Arkan Kerim direct its efforts towards improving and promoting tourism in Macedonia, as well as the international promotion of Macedonia. In this regard, Mr. Kerim year, met with the Minister of Tourism of the Republic of Bulgaria Mrs. Nikolina Angelkova in Macedonia during the official visit of Mrs. Ankelkova of Macedonia, on the sidelines of the fair ITB, held this year in Berlin to discuss the potential cooperation between the two countries in the area of ​​tourism and its promotion.

In addition, during the meeting they discussed the guidelines that will lead to an increase in attendance of Macedonia and Bulgaria, and as a great challenge to be overcome by both countries regulating the smooth flow of tourists at border crossings.

Furthermore, the two countries is very important to create a common agenda for the development of tourism products and destinations as a common management approach allows more attractive offer for tourists whose destinations are European and Balkan countries.

According to the State Statistical Office of the Republic of Macedonia in 2015 the number of Bulgarian tourists who stayed overnight in Macedonia is 52,748.