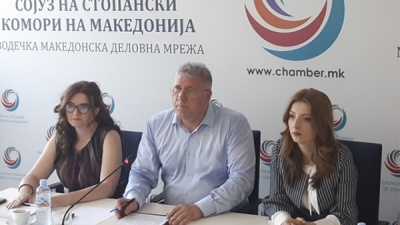 Arsovska stressed that by joining the Chamber of Mediators within the Union, we introduce yet another important segment in the operation, which is a comprehensive structured system for alternative dispute settlement with mediation or a procedure for compromise dispute resolution.

“The mistrust in the judicial system is increasing, the rule of law is one of the challenges that international institutions are alerting to in the reports, and the court proceedings are disproportionately long, which is the reason for dissatisfaction with the business community. The duration of court proceedings results in prolonging the resolution of debt creditor disputes, whereby the inability to collect receivables results in liquidity problems of companies, and in those with large claims in litigation even the initiation of bankruptcy proceedings due to inability for service obligations. The Alliance as an advocate of the interests of the private sector alarmed on the need to affirm itself as an alternative way of resolving commercial disputes with an emphasis on saving time and funds among the companies at a time when it is necessary to start with the implementation of structural reforms in the judiciary which would restore the lost confidence in the business community. “Arsovska stressed.

The President of the Chamber of Mediators, Mladenovski, at the official accession to the Union, noted that in the following period we will commit our country to be a leader in the region in the field of mediation.

“The Chamber of Mediators with the accession to the Macedonian Chambers of Commerce continues the policy of building bridges of cooperation and friendship with the business community. We at the Alliance see partner, associate and friend. We saw great opportunities to jointly make changes in the approach of businessmen in resolving disputes. Through lectures and information we will introduce them to the advantages and characteristics of mediation. By choosing this procedure, the business community will send a clear message to the public, that it is ready for cooperation based on interest, “Mladenovski said and added that mediation contributes to reducing the large division on various grounds and reducing conflict in the society.

The European countries, the Kingdom of the Netherlands, have a high percentage of mediation in dispute resolution. In Macedonia, the total number of mediations between 2007 and 2016 could not reach a three-digit number, since 2017, there is a dramatic difference. Licensed mediators, as of April 10, 2019, showed the introduction of 1364 cases in the Register of the Ministry of Justice. According to the statistics of the Ministry of Justice, out of the total of 1364 cases that have been recorded in the Register of the Ministry of Justice, 79%, ie 1079, have been concluded with an agreement. As for the commercial disputes, from 395 mediations on this basis, before the mediators, 129 or 32.6% ended with the agreements reached.